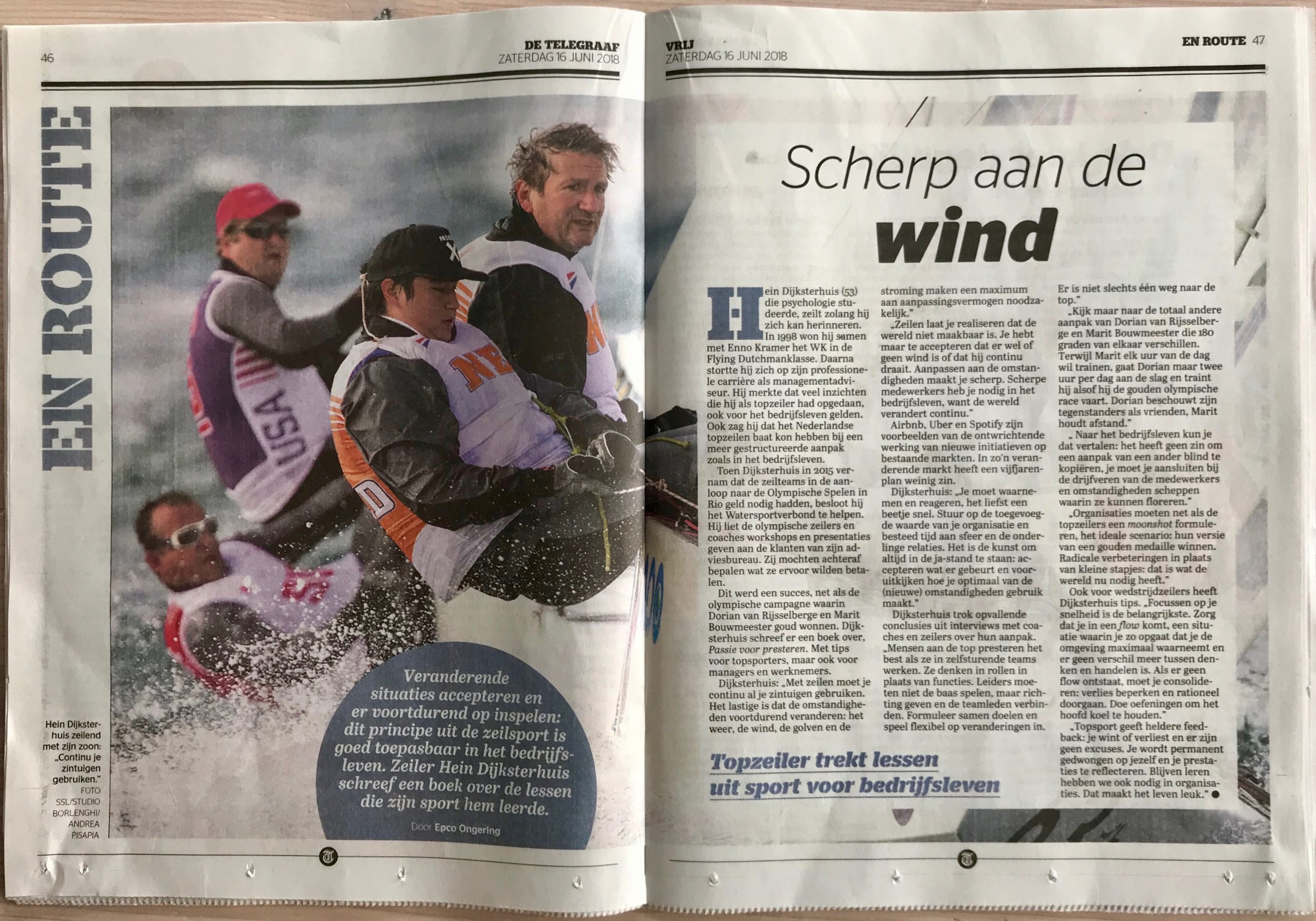 Epco Ongering wrote a great article in the Saturday weekend edition of national newspaper De Telegraaf about my book Passie voor Presteren. It almost reads like a summary. So for my international friends I ran his article through Google translate: enjoy the read!

Life lessons from the top-sailors: close to the wind

Hein Dijksterhuis is a coach in business, but also a top sailor. He became world champion in the FD-class and works for several multinationals. He bundled his experiences in a crowdfunding campaign for Olympic sailors and recorded a number of life lessons from the top sailors.

Dijksterhuis studied psychology and has been sailing for as long as he can remember. In 1998 he won the World Championships in the Flying Dutchman class together with Enno Kramer. Then he focused on his professional career as a management consultant. He noticed that many of the insights he had gained as a top sailor also apply to the business world. He also saw that Dutch top sailing teams could benefit from a more structured approach, such as in the business world.

When he learned in 2015 that the sailing teams needed money in the run-up to the Olympic Games in Rio, he decided to help the Dutch Watersport Association. He supported the Olympic sailors and coaches to give workshops and presentations to the clients of his consultancy. The customers were allowed to decide afterwards what they wanted to pay for it. It became a success, just like the Olympic campaign, in which Dorian van Rijsselberge and Marit Bouwmeester won gold. Dijksterhuis wrote a book about it: Passion for performance. A book with tips for sailors and top athletes, but also for managers and ordinary people. “They are actually life lessons from the topsailors.”

Dijksterhuis: “While sailing you will continuously use all your senses to sense what is happening and what will happen. The tough thing about sailing is that the circumstances are constantly changing. The weather, the wind, the waves and the current make a maximum of adaptability necessary. Sailing lets you realize that the world is not malleable. You just need to accept that there is wind or not. Or that the wind is shifting continuously. Adjusting to the circumstances makes you sharp. You need sharp employees in business, because the world is constantly changing. ”

From the American army the term VUCA became common, because the world became Volatile, Uncertain, Complex and Ambiguous. Airbnb, Uber and Spotify are examples of the disruptive effect of new initiatives on existing markets. In such a changing market, making a five-year plan makes little sense. Dijksterhuis: “You have to observe and respond. And preferably a little fast. Steer on the added value of your organization and spend time on culture and mutual relationships. It is the art to always be in a YES-state of mind: accepting what happens and looking forward to making optimal use of the (new) circumstances.”

Dijksterhuis drew a few striking conclusions from interviews with coaches and sailors about their approach. “People at the top perform best when they work in self-managing teams. They think in roles instead of functions. Leaders should not play the boss, but give direction and connect the team members. Formulate goals together and respond flexibly to changes. There is not only one way to the top. Just look at the differences between the approach of Dorian van Rijsselberge and Marit Bouwmeester, who differ 180 degrees from each other. Where Marit wants to train every hour of the day and considers a non-trained hour as a lost hour, Dorian only works two hours a day and trains as if he is racing the Golden Olympic race. Dorian regards his opponents as friends, but Marit keeps her distance. For business this means: It makes no sense to copy an approach from another organization blindly, you have to align to the motivation of the co-workers and create conditions in which they can flourish. Organizations, like the top sailors, have to formulate a ‘moonshot’: their version of winning an Olympic gold medal. It is about radical improvements instead of small steps. That is what the world needs now.”

Dijksterhuis also has tips for racing sailors. “Focus on your speed is the most important one. Make sure you get into a ‘flow’, a situation in which you become so absorbed that you perceive the surroundings to a maximum and there is no difference between thinking and acting. If there is no flow, you have to consolidate, limit loss and continue rationally. Do exercises to keep your head cool. Top sport gives clear feedback: you win or you lose and there are no excuses. You are permanently forced to reflect on yourself and your performance. Keep learning, that’s what we also need in organizations. It makes life fun.”