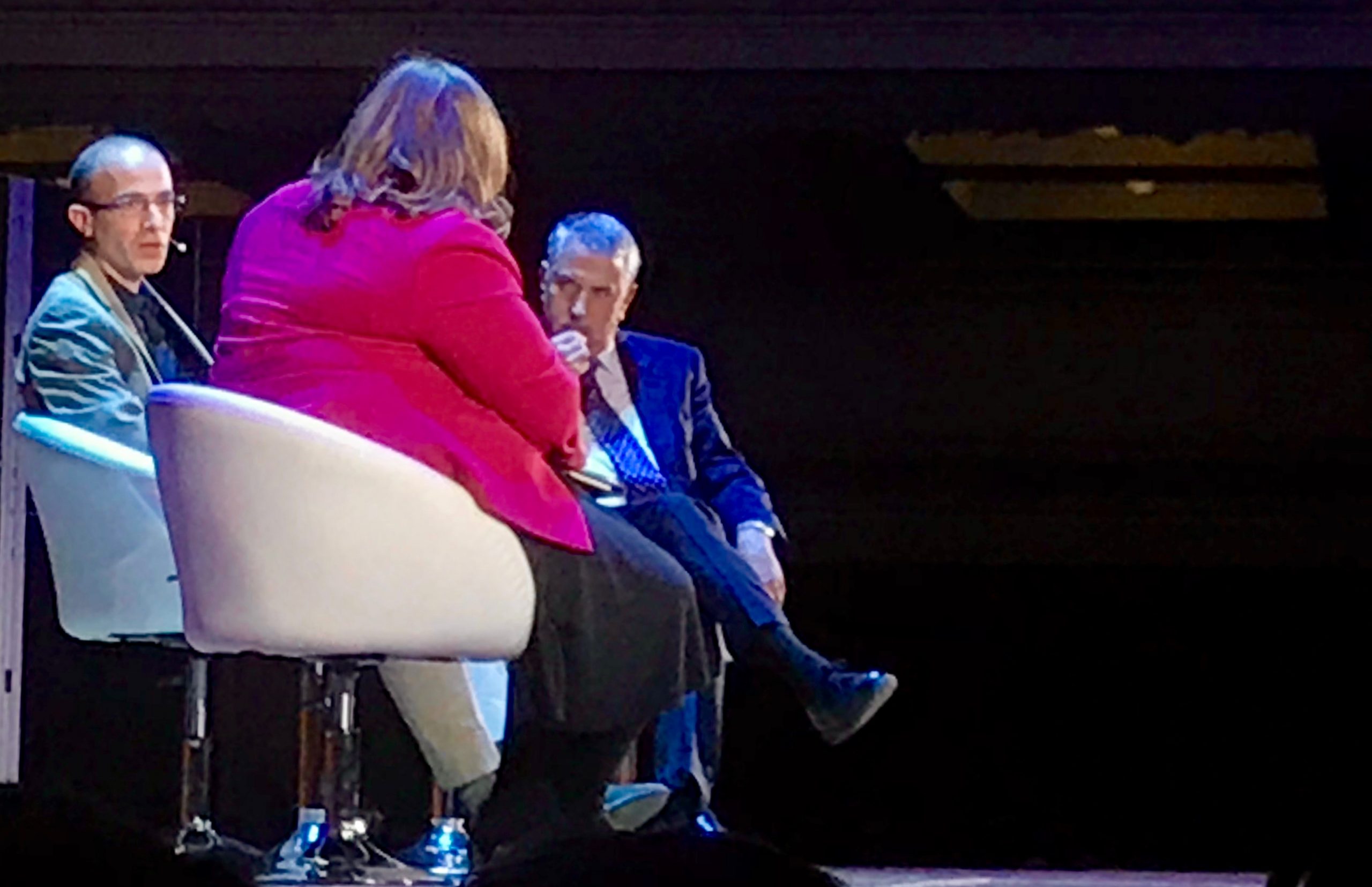 ‘Soon we will have a useless class of human beings because of Artificial Intelligence. The collapse of liberal democracy is nearing. Algorithms will soon know us better than we know ourselves. It will be easy for robots to manipulate us since they know better how we feel. See how Facebook is already used during elections,’ these were the openings remarks by Yuval Noah Harari in the beautiful Westminster Central Hall, London. He doesn’t like wasting time.

Thomas L. Friedman is his dialogue partner tonight. He shares with us that he sees 3 non linear changes: nature, globalisation and Moore’s law (exponential growth of Tech). Later is over. We are interconnected but we start to realise that we live in a totally interdependent world. Resilience, adaptivity, entrepreneurial diversity and circularity are the way forward. No dogmas anymore.

Harari replies (?) that nature doesn’t care if we survive as human beings or not. Nature will survive with or without us. That’s up to us. While time is accelerating we don’t know anymore what the future will bring. We lost the ability to formulate a long term vision. We don’t know anymore what to teach at school. China is the only country where they are seriously thinking about the future.

Friedman is thankful to everybody who is late (clever promotion of his last book: Thank you for being late. He knows how to promote his writings, I for sure can learn from him). Leadership is even more important these days. With the current pace a few degrees left or right means a huge difference where you end up. We need to turn AI into IA: from Artificial Intelligence to Intelligent Assistance (of humans) and Intelligent Algorithms. We all need to become life long learners. Self motivation will be the key differentiator between employees. He gives enthusiastically a detailed example how AT&T has streamlined the learning within their organisation (every year new skills needed, everybody is assessed on these, if you score low you get money to improve yourself or you need to leave, the next year again another skill set needed, etc).

Now the clash of the titans (as the New York Times advertised the meeting) may have happened. To Friedmans surprise Harari intervenes and states: ‘But this sounds sooo stressful Thomas. We live already in a stress epidemic society. We will face discrimination by AT&T on an individual basis. As a person you can’t defend yourself to it. The system has said that you score too low and the algorithms will be right. This further increases the stress in society. This is not what we want.’

Friedman is hit between the eyes. For a tiny moment. But he is an American, pretty resilient, recuperates and fires back: ‘Yuval, you talk about the downside. And of course at every upside there is a downside. But I’ve seen (in another organisation) that because of the gathering of data in combination with AI, the organisation could reduce the costs of cleaning and they turned the cleaners into guides for visitors of the organisation.’ The titans were loosely moderated and didn’t feel comfortable or challenged enough to take this route of confrontation and deepen the conversation. That was a pity. Downloading started.

They talked about being an optimist or a pessimist (engineers think in possibilities and historians in risks). Friedman stressed the importance of the Golden Rule. ‘That’s the basis of all ethical concerns: ‘Do unto others as you would wish they would do unto you’ or ‘That which is despicable to you, do not do to your fellow.” He only needed a chapter in his book where Yuval wrote a whole book Homo Deus on the same topic.

Harari hided behind being a historian and not knowing the way forward. But for sure we shouldn’t go backward. We need to better understand cause and effect and realise there is no single future or story.

All in all an interesting evening. But it made clear how hard it is to moderate people like this in front of a large audience. Something beautiful could have happened if they had been challenged to really listen to each other. Exactly what Thomas Friedman said at the end of the evening: ‘Listening is a sign of respect and the way forward’. As you can see in the picture he has a great listening pose but he didn’t practice it tonight. Neither did Harari.

It made me think about our conference ‘Leading into the unknown’ October 18 in Leiden. How can we -together- come to new insights that are so much needed?