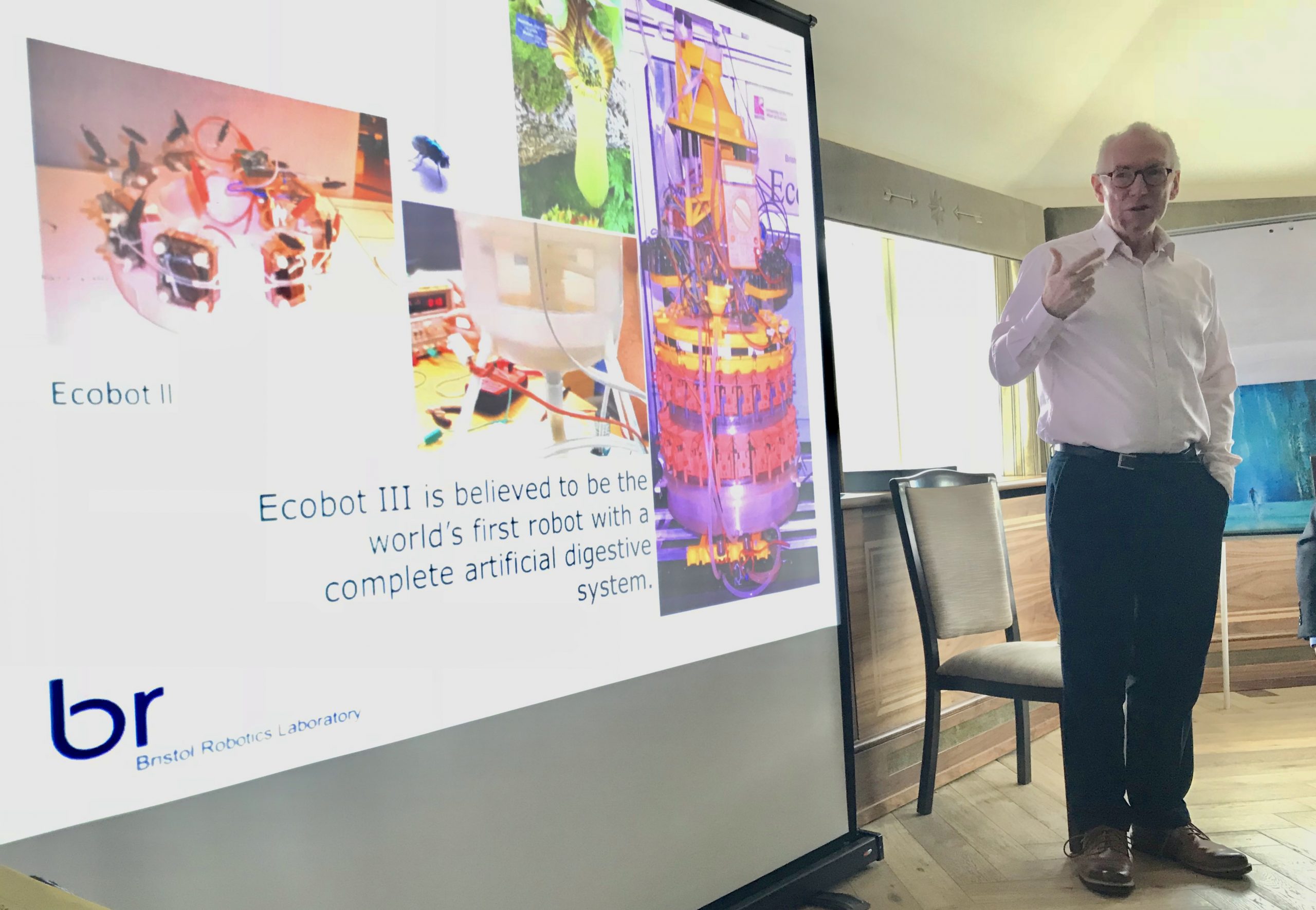 With 124 Olympic and 3 Paralympic medals to its credit, Leander Club is the most successful rowing club in the world. Passion for Performance at it’s best and the spot where we organise our third CEO-Circle of the Global Leaders Academy in the series: How to synchronise technology, nature and humanity.

Prof Alan Winfield was our special guest who hadn’t much difficulty bringing these fields together: his Bristol Robotics Laboratory has designed a Robot (the definition of a robot is: embodied artificial intelligence) that eats flies. Not for fun but to power itself! It has a true digestive system and doesn’t need a plug in the wall for electricity. It feeds itself with flies. In a similar way as meat eating plants do. But what about humanity you may wonder? This invention forms the basis of follow up design in which they extract energy out of your pee to light toilets in refugee camps. Okay, an interesting guy.

He calls himself now a robot ethicist. He sees several categories of ethical harm: unintended physical, psychological, socio/economic and environmental harm. His question is how these harms can be minimised or mitigated. Part of the answer is to have ethics as a key function in organisations, just like we had quality in the 80’s and 90’s. In tech organisations there is hardly any awareness, let alone action around ethics. Reading the final report of the high level expert group on fake news and online disinformation (made by the big tech organisations for the European Commission) that was presented yesterday, it is clear that WE, the readers, need to change and not the distributors and platforms of fake news. It’s a pretty annoying read, lacking any clarity about how to deal with fake news.

Two of the problems that he pointed out are: all the wealth generated from the current social media platforms is going to a few people in the world and why do we want this to happen? That was the same message as Pieter shared in our second CEO circle of the year. A second problem is that almost all tech is developed by white young West Coast men in Silicon Valley. Their value system is -unintentionally- dominant in the tech they develop. Facebook’s algorithms are now focused on making as much money as possible for Facebook. Another set of algorithms could have been developed to make as many friends and connections as possible. But that’s not part of the developers value system… He advocates more diversity in the top of these organisations and to train people in ethics. All voices of AI systems are female, isn’t that sexist? Females are of service? Why don’t we develop a gender neutral voice? Is it okay to have robots as surrogate pets? Or should we have robots do all the additional jobs so that (human) care takers have time to talk with the elderly? Many questions that are hardly being raised. He couldn’t find an organisation with a true ethical governance. And maybe it’s good to mention that nowadays it is possible to have a very small flying robot that recognises faces and that can easily kill the soul behind that face. But did you know that facial recognition works best for white men and doesn’t work very well for black females? Lucky them.

Our moral compass becomes more and more important when we lead ourselves and our organisations into the unknown. Tech grows exponentially and we need to keep up with our moral values to create a world we want to live in.

Coaching Passion for Performance Sustainability No Comments
Next Post

Spring cleaning while a fowl is born!

Spring cleaning while a fowl is born!