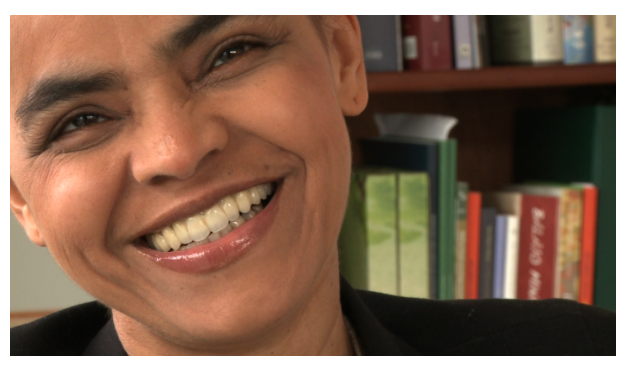 Marina Silva: not right, nor left but forward together!

Together with Walter Link and Yoeri Albrecht I’m organizing a meeting with Marina Silva October 10 at 17:00 hours in de Balie, Amsterdam.

The Balie, Global Leaders Academy and Global Academy Foundation invite you to join UN Champion of the Earth and Brazil’s greenest politician to explore how all of us can and have to work together to achieve break-through solutions to our shared global crises of sustainability, politics and meaning.

Marina grew up hungry and illiterate in the midst of Brazil’s vast Amazon forest, the Earth’s largest lung that is so important for global climate protection. Twice already,

After being an environmental movement leader whose colleagues were regularly murdered, she became Brazil’s youngest federal senator and environmental minister who reduced deforestation by 60%. She resigned in protest against the political corruption that led to criminal investigations against top politicians and business leaders and is fundamentally threatening Brazil’s young democracy.

Now she is calling on Brazilians and all of us to work together beyond the ideologies of right and left towards an integral and dynamic sustainability that unites the regeneration of our environment with that of our overall society, economy and politics, our diverse cultures and our shared humanity.

Marina, as she invites everybody to call her, grew up as one of twelve siblings in a poor rubber tapper family in the Amazon state of Acre. When she was 16 years old, she contracted severe Hepatitis and was sent to Rio Branco for treatment. She was illiterate, but with a dream of studying and serving her people. She worked as a maid, learned to read, enrolled at a public school and studied history. She was inspired by liberation theology and became a close collaborator of environmental activist Chico Mendes. While being an ardent proponent of negotiation, non-violence, and innovative solutions, she saw Chico and many of her fellow activists murdered.

In 1994, Marina became the youngest senator ever elected to Brazil’s Federal Senate. As a native Amazonian, she built support for environmental protection, social justice and sustainable development in the Amazon region. As Minister of Environment, she took drastic measures to protect the Amazon forest, clamping down on illegal activities, and managed to reduce deforestation by almost 60% between 2004 and 2007. Another result of her work is the Amazon Fund, established to prevent greenhouse gas emissions through rainforest conservation.

After winning 20 million votes in 2010 on a shared ticket with one the country’s most admired sustainable business leaders, she became a front-runner in the 2014 elections. She lost in a brutal campaign against the recently impeached president. She now leads a new party she founded called REDE Sustenabilidade or Sustainability Network. It tries to fundamentally reinvent politics as usual. When asked whether she is on the right or left of politics, she answers that they want to go beyond this polarization to the front where we can find sustainable solutions together.

Passion for Performance: almost on your bookshelf!

Passion for Performance: almost on your bookshelf!